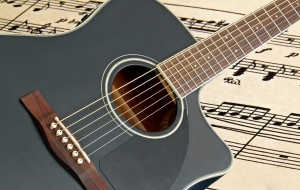 When most people think of the 1950s, they think of the world as it emerged post WWII. Rebuilding, restructuring, and a return to social conservatism were themes felt in countries including the US and Great Britain. Many people made a concerted effort to promote family values and religion all with a strict sense of order and conformity. But there were those that still had a wild side to nurture. Because of this, a new form of music called rock n’ roll was born.

Rock n’ roll, a term coined by an American radio DJ around 1954, was mostly a blend of country and rhythm and blues mixed with a fast moving back beat. Rock music soon emerged as a popular musical form in the US and across the globe thanks to musicians like Elvis, the Big Bopper, Little Richard, and others. Popular with teenagers and those that wanted a break from mainstream conservative views, this music gave listeners the chance to express themselves in a way other musical forms couldn’t at the time. Even today, rock music still carries a rebellious rhythm.

Advances in music technology also had a big impact on rock music because it was during the 1950’s that 33’s and 45’s were developed. These smaller records had much better sound quality than the standard at the time – the 78. Also, these records didn’t require large turntables like those found in most living rooms at the time. Teenagers could now buy smaller record players and listen to records in their rooms instead of with the rest of the family.

45’s, also known as singles because there were two songs – one on each side, were easy to transport, which made music very easy to share with friends. Other advances in music technology included transistor and car radios (found in earlier car models, car radios didn’t become a standard in most vehicles until the 1950’s). Portable and easy to use, transistor radios became a very popular way to listen to music. Car radios allowed people to drive while listening to music – something people take for granted today.

New technologies combined with the growing popularity of rock music, teenagers and young adults had finally found a way to separate themselves from the adults and create their own unique subculture.

Over the years rock n’ roll has gone through many, many changes. As musicians continue to explore this mysterious, but familiar genre, many return to its roots – the 1950’s. Most rock songs of today still contain that energetic and rebellious back beat along with a mix of other musical forms (rhythm and blues and country still a favorite combination). New generations of musicians and music lovers learn from the past and project what they like into the future. Collecting old records from this and other time periods has become a new pastime for many. With other technological advances including the Internet, people can relive their lost youth, try to understand what older generations are talking about, or just amass a large collection of old, dusty records that may or may never be played again.